As you may have guessed, I’m a fan of German cars. Sure, people may think they’re unreliable, high maintenance, and expensive to own. This is only true if you take your car to the dealer (I HATE going to the dealer, sales and service always manage to make my skin crawl.) for service and don’t believe in working on your own car. I’ve had good luck with routine maintenance so far, oil changes, and cleaning have taken me from 114000 to 155000 comfortable kilometers.

Ok I lied, I needed a new power steering rack, flex pipes,, sway bar links, and a Bluetooth module. At least replacing those are not routine maintenance right?

My rack had gone out at around 130k while I was on the highway. I felt a strange vibration through the gas and brake pedals then heard whining as I pulled off the highway. Luckily I was able to make it to a McDonalds parking lot to assess the situation. Before this happened, I felt some play in the steering wheel while it was centered. The play came progressively and I had checked my ball joints, steering coupler, tire pressures, etc and found no play. I tried to adjust the preload on my steering rack the week before it failed as suggested by some forums posts. It felt no better with any adjustment I made. Back to the parking lot, I didnt notice anything leaking out of the steering boots, but my power steering fluid reservoir was empty (by the way, never use anything other than OEM Audi/VW power steering fluid in Audis/VWs). Conveniently I had some extra power steering fluid from my EV Conversion which my dad brought to me (Thanks Dad!) so I could fill the system, bleed most of the air, and limp home.

Here’s the blown rack, adding to the ecological disaster that is my driveway:

A nice shot through the bowels of the A6. It was not hard to get the rack out, there are 3 bolts holding the rack to the car plus 4 at the steering knuckle and one for the steering shaft. Contact me if you want the procedures.

I didn’t take a photo of the passenger side of the rack, but it was badly rusted and pitted. When the boot came off, red fluid gushed out. I assumed the fluid became contaminated with rust from the rack which then caused pitting which cause excessive ware on the seals. As to how the rack got screwed, I have no idea.

A new genuine audi replacement rack was about $1600 with no tie rods and a rebuilt one was about $400. For a little over $400 I got a used rack from Standard Auto Wreckers with lifetime warranty (great service, highly recommended). The rack came from the a low mileage car that had met it’s make, pictured below. I had also gotten new outer tie rod ends from autopartsway.ca (also highly recommended for high quality auto parts in Canada). I chose to get a used rack just becasue everything would be exactly as Audi intended, and I had more confidence in totally genuine parts.

No pictures taken during installation since I was trying to finish before mosquitoes ate me alive. After a trip to the dealer to get an alignment done (this is the ONE thing I will let the dealer do to my car becasue I can’t do it) everything was smooth sailing again. They even washed my car to make me feel good.

Everything was smooth for a while until an exhaust leak developed in my flex pipes, both of them. The leak was very audible with the windows down and made my car sound like a riced out civic, as a friend put it. Conveniently the flex pipes are nearly vertical behind the engine, but Audi was nice enough to make all the downpipe/cat flange bolts just accessible enough for a human to undo them, along with mid-pipe clamps to separate the system.

Here we have the a guilty flex pipe, see the tweak at the bottom: 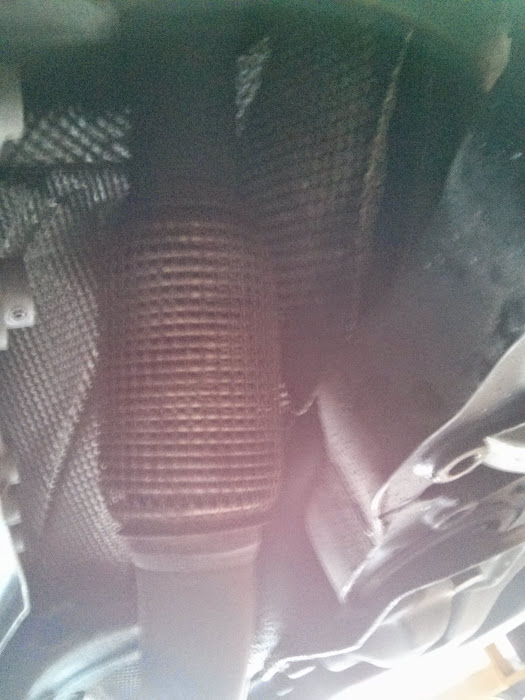 And a hoist to make thing infinitely easier: 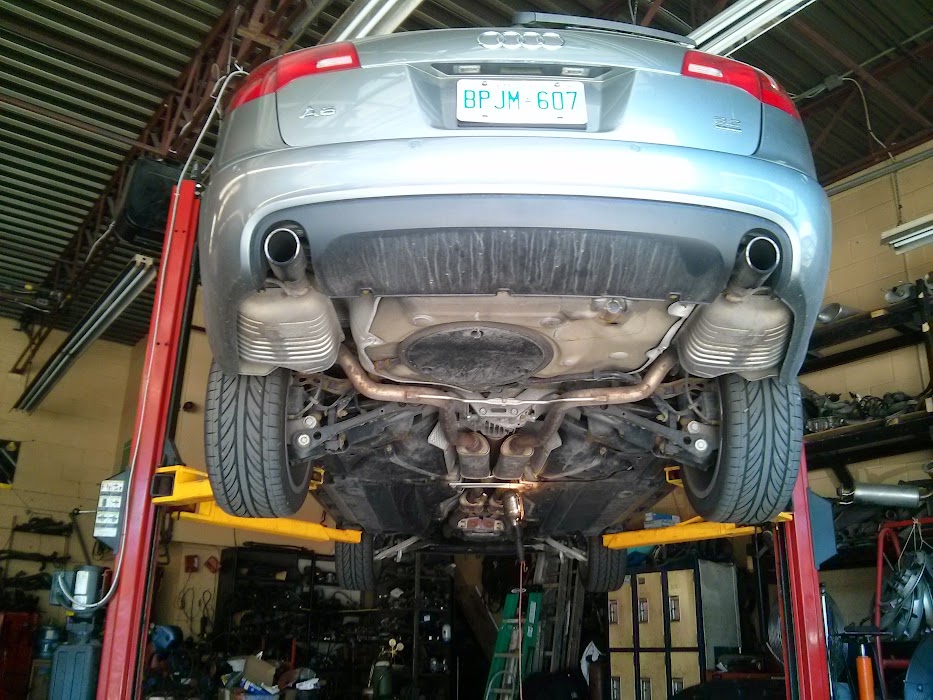 Flex pipes out, no big deal, other than the face I forgot to photograph the finished product. the job took roughly 6 hours, mostly trying not to break anything. I got away with tacking the new universal 2″ x 8″ flex pipes in place without incident. 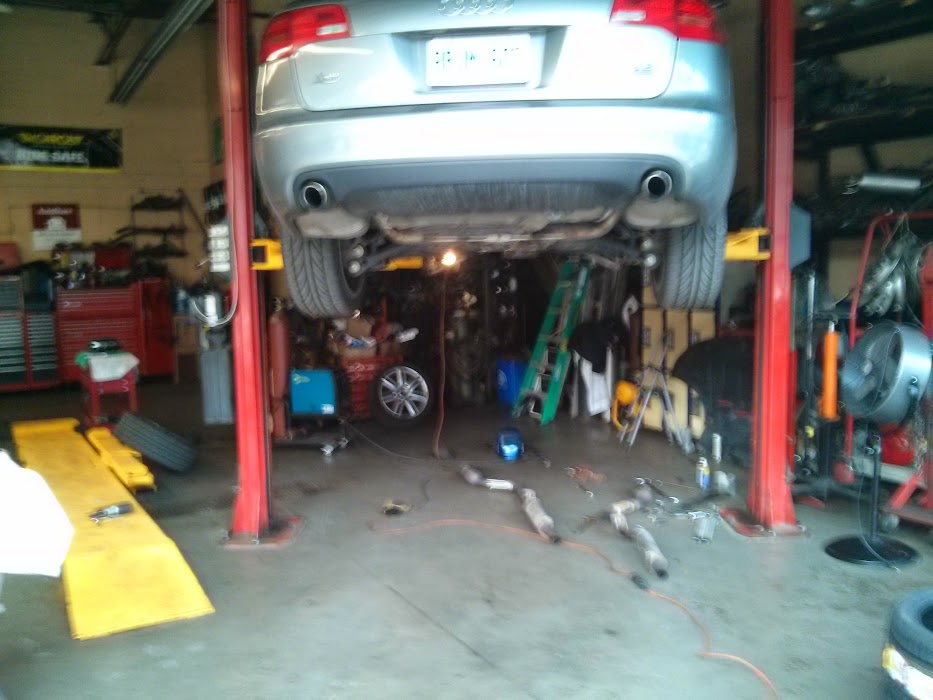 Knowing someone who can loan you a hoist and help you when things get difficult can really come in handy. It would be even better if I had someone to follow me around Trailer Park Boys style so I wouldn’t have to type so much.

The final non-maintenance item on my car was the MMI system crapping out. The MMI system is comprised of different modules for controls, navigation, Bluetooth hands free, etc. The modules are all linked on a single fiber optic bus (MOST) where everything is essentially in series. If any of the modules stops working, the entire system goes down and you are left staring at a blank 6″ screen screaming “Haha you have greatly underestimated the number of problems you will have with a German car”, in a German accent. Ironically, the purpose of the fibre optic bus is to eliminate a rats nest of wires and electrical nightmares.

Still, diagnostic procedure stays the same, check for faults with VCDS, find a bad connection or module, rectify the problem. VCDS returned “ERROR” for the optical bus diagnostics, So we start with the 2 places where MMI components live, behind the glove box and in the trunk. 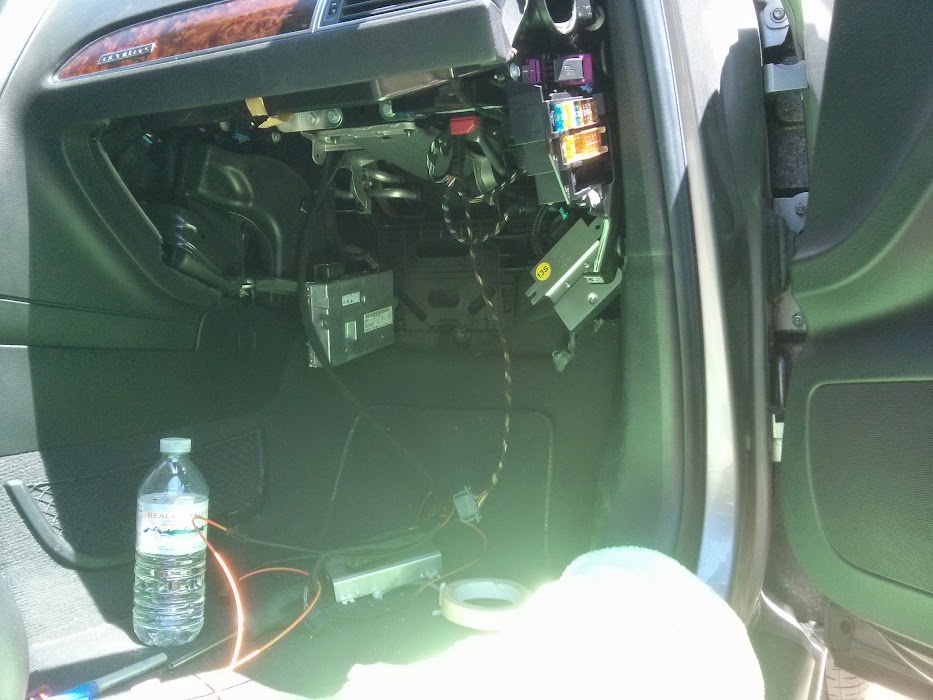 I suspected that the can interface was doing something funny or that a fibre optic cable had been bet too sharply. Fortunately, or unfortunately, this was not the case for anything behind the glove box (Don’t unplug the CAN diagnostic interface J533 while the car is switched on, or everything gets mad at you). Checking for continuity is easy, use a flashlight on one end of the cable, and if it makes it out the other side then you’re good.

Unfortunately I wasn’t getting any continuity to the amplifier, navigation, and radio modules in the trunk of the car. Placed in the world’s most logical location is the Bluetooth module, interrupting communications between the glovebox and trunk MMI electronics (under the driver’s footwell). 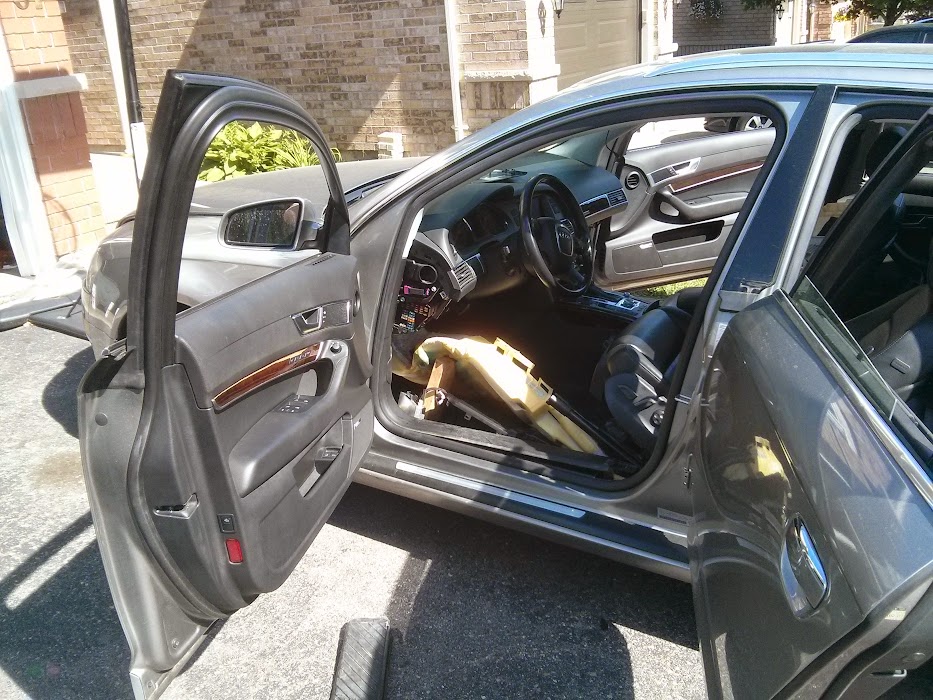 Getting at the module involves removing the interior B-Pillar trim, door sill, and tilting the seat back in order to lift the carpet and access a watertight box where the module lives. 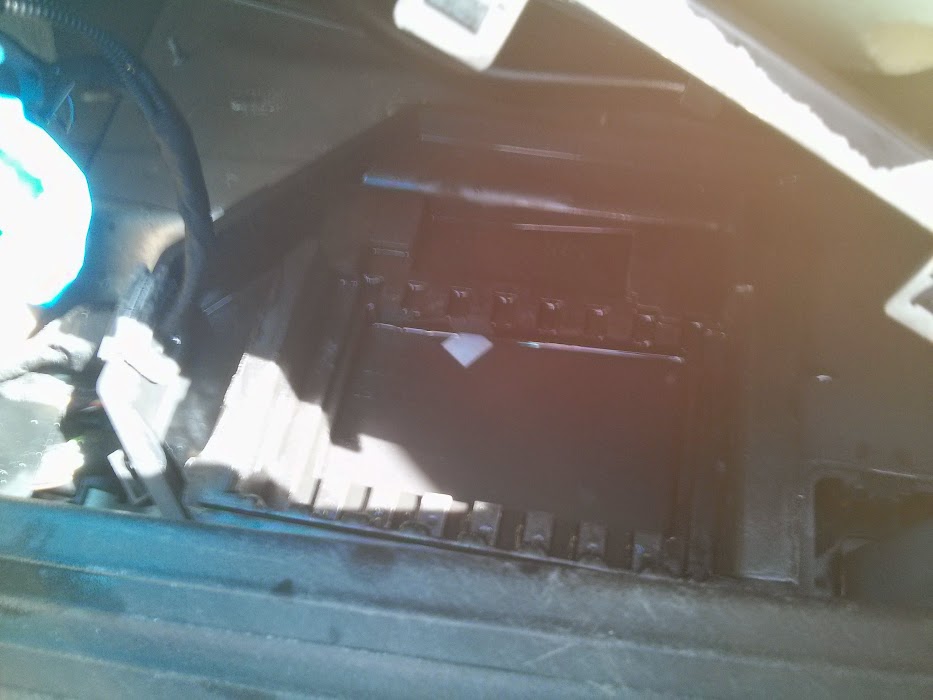 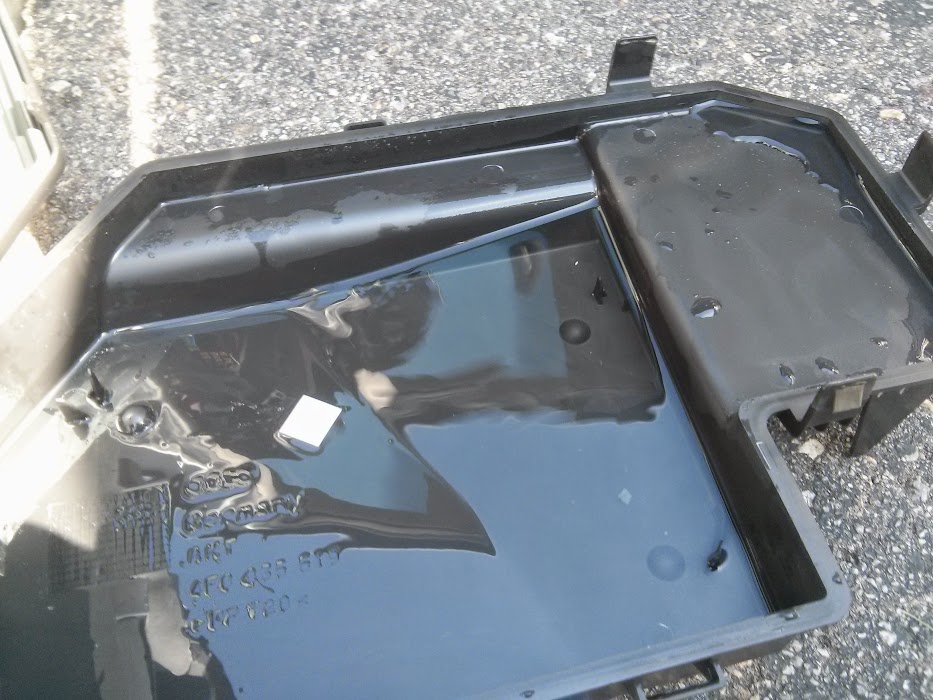 Apparently this is a common problem but I was not expecting a soaked carpet and flooded electronics enclosure. The root cause was a drain plugged up with rotting leaves. I had heard water sloshing around but assumed it was the jug of water in my passenger foot well, big mistake. There is a drain underneath a sheet metal bracket for the alarm horn in the plenum chamber. It’s hard to access and can if clogged, will cause water to enter the cabin through passages for wiring etc. I vacuumed out most of the water and joined the 2 fibre optic cables for the Bluetooth module to bypass any issues. to my surprise, the MMI came to life and i could be relieved that nothing too expensive happened.

Basically I could have avoided this be unclogging the drain on a yearly basis, stupid me. $200 later I have a new Bluetooth module from Ebay. It had a newer software version than my previous waterlogged module and worked, but my phone (Nexus 4) would no longer automatically pair to my car and read my phonebook. This was a huge annoyance but after a lot of contemplation, I decided to order the update CDs from genuineaudiparts.com (first order to them) for a whopping $50 including shipping to Canada. Hopefully the updates will fix the issues I’m having.

That’s enough for tonight. If I stay up longer things will become unreadable and people might start thinking I’m illiterate. More coming soon.

In conclusion, I still love German cars and working on cars, but you probably don’t understand.